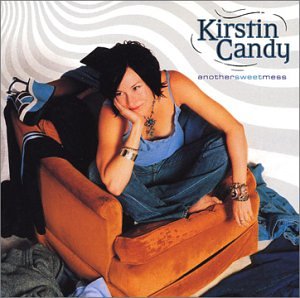 "span"Nobody has ever had to tell Kirstin what to do. Shes possessed of an inner power, akin, some say, to the earths rotational force. This phenomenon makes it possible for her to be both the open spirit and the driven talent that her intimates know her to be. "Force of nature" is, by now a cliché but if the shoe fits

"span"With the completion of Another Sweet Mess, (her new album for Escalator Records, Kirstins consuming passion for creating truly evocative music is on the cusp of a much-deserved breakthrough. The album is a collection of fresh Candy compositions that, at last, can be heard in the best possible context thanks to the efforts of producer Don Smith and some of the most renowned musicians in the rock and pop field. Because her vocal range is so great, Kirstins material tends to run the gamut from quiet contemplative songs ("Heaven," "60 Years") to full throated gospel-tinged burners ("Prayer, "Let It Flow") with lots of diversity in between including "Crazy."

"span"Others dropping in to the "Messsessions" to lend a hand were Ivan Neville who contributed keyboard and vocal parts and Crackers Johnny Hickman on guitar and Dave Immergluck (Counting Crows, John Hiatt) on pedal steel, mandolin and guitar.

"span""It was a blast working with all of these guys," reports Kirstin whose keyboard work is also integral to the albums sonic ambiance. "We were having so much fun together and I think we captured that sprit in the music." Rumbo Studios in L.A.'s San Fernando Valley had previously been the site of groundbreaking sessions by Tom Petty, No Doubt, The Smashing Pumpkins and Stevie Nicks. Kirstin was especially excited to have coaxed Steve Ferrone into doing a solo vocal part on the ironic track "Money." "I may have unleashed a monster -- Steve said so -- but it was great fun," says Kirstin of the mighty drummers seldom-heard vocal prowess.

Don Smiths sterling reputation as an engineer and producer was forged in the crucible of innumerable critically and commercially well-received projects. Prior to manning the console for Kirstin, he worked with John Hiatt, Keith Richards, Cracker, Tom Petty, Roy Orbison, Stevie Nicks, Bob Dylan, The Rolling Stones, Iggy Pop, The Neville Brothers, The Tragically Hip, U2, Eurythmics, Traveling Wilburys, and Aretha Franklin.

Kirstins music and charisma strike a chord with anyone who listens - in person or on record. Her message of being true to ones self, to "be who you are," coupled with the intensely honest reflection that makes her writing and performing so refreshingly distinctive, is a tonic for an age when cynicism and gloom seem be the prevailing attitude fashion.

THE POWER OF DIESEL WHEN YOU NEED IT MOST

PEACE & QUIET WHEN YOU NEED IT MOST

HIGH PERFORMANCE WHEN YOU NEED IT MOST

Designed from a blank sheet of paper for both commercial and recreational use, the CXO300 is a new generation of diesel technology, offering a high-powered 300hp diesel outboard propulsion option for the marine market.

If you are interested in seeing the CXO300 outboard engine in action, join us for a demonstration on one of our demo boats across the globe.

Our support network covers over 100 territories across the globe, offering 24/7 customer and technical support.

The fuel efficiency of the CXO300 provides you with longer range for your fishing trips, helping you find those extra special fishing spots to get your catch-of-the-day.

The CXO300 offers a service life that is three times that of a gasoline equivalent, therefore reducing your vessel’s downtime and ensuring your business can run as usual, for longer periods of time.

This high-performance, V8 diesel outboard engine quickly reaches its top speed of 4000RPM, getting you to where you need to be, swiftly and efficiently.

The commercially rated CXO300 outboard engine has been designed and built for purpose to support your commercial operations. Our comprehensive global support network is there for you 24/7 to ensure downtime is kept to a minimum.

Having received EPA Tier 3, RCD II, and IMO II certification of approval, the CXO300 is one of the most environmentally friendly diesel outboard options available to assist in energy and environmental jobs out at sea.

The CXO300 produces 20-35% less CO2 than comparable gasoline products, making those trips back and forth on Pilot boats less harmful to the natural environment, whilst also reducing your carbon footprint.